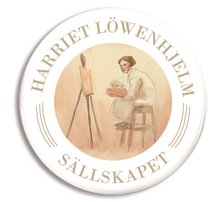 Harriet Löwenhjelm was born on the 18th February 1887 in Tågaborg, Helsingborg, Sweden and died on the 24th May 1918 in Romanäs Sanatorium in Småland, Sweden. She grew up in a well to do family and showed artistic talent from an early age. In the beginning, her poems were cleverly humorous though often with a melancholy undertone and they were intended as a complement to her drawings rather than the reverse.

In 1913 she was found to have tuberculosis of the lungs and spent the greater part of the life left to her in sanatoria. Her later poems were influenced by living in the shadow of death and have a deeper, more religious quality, though still retaining the stylish charm of her earlier works for example, Är jag intill döden trött (I am tired unto death).

Always in her writing she alternates and contrasts the bizarrely humorous with the serious e.g. Förhistorisk jakt (Prehistoric hunt), contrition with rebellion e.g. Nu har, till sist, jag blitt så sur och lessen (I’ve reached the point of sorrow and despairing), intellectual irony with farce e.g. Det bodde en furste i Urvädersgränd (There once lived a prince). Christianity and other religions are treated both with reverence and with satire e.g Världens religioner (The world’s religions).

Throughout, there is a delightful playing with words e.g. Ej Fahrenheit visa mot nittio mer (It’s no longer ninety degrees Fahrenheit) and often a retreat into a secret, exotic world where she can be happy e.g. Aftonstämning på Ceylon (Eventide in Ceylon). The longing for love in an exotic situation is expressed at fantasy level in the beautiful Ett safir-hav, blandat med Karbunkel (A sapphire-sea, bright with ice-gems blended).

As with most poets, some of her poems have become universally known favourites. There can be few people in Sweden who do not remember the haunting love poem “Beatrice-Aurore” and the painfully poignant “Tag mig. – Håll mig. – Smek mig sakta” (Take me—Gentle arms enfold me”), the latter written shortly before she died and is a cry for someone loved to comfort her in her final hours.

Despite the cold, clinical world of sanatorium life and a background of the First World War raging in Europe, Harriet filled her earlier poems with a love of life and language and her accompanying drawings show the same leaps of imagination as her words.

Some poems by Harriet Löwenhjelm

TAKE ME, HOLD ME

Take me. Hold me. Slowly caressing,

gently enfold me a little while.

Weep a tear for facts depressing,

watch me asleep and tender a smile.

O, do not leave, you do want to stay,

o, stay here till I myself must depart.

Lay your beloved hand on my forehead --

yet for a little while not apart.

Tonight I shall die. There flickers a flame.

A friend by my side is holding my hand.

Tonight I shall die. But who knows the name

of where I am going -- unto what land?

I bought an antique folio

on how to figure dreams.

And then one night I had a dream

a love of mine from long ago

She came quite near, she took my hand,

At once I saw she was  the only one

We walked under the lindens

on a mat of yellow leaf

and tears coursed down my cheeks

but they were tears of joy, not grief.

a long time, hand in hand,

then suddenly before an ancient

windmill we did stand.

be mine forever more!’

'Then catch me if you can!' she cried

and skipped in through the door.

And I ran in and looked

in every nook, on every floor,

My tears then woke me up

and in my heart I felt a sting.

My dreambook when consulted

yielded — not a single thing.

NOW I'M SO SAD AND SOUR

Now I'm so sad and sour that at last I'm

not sure I have any more to yield, nay,

every which way flew every single pastime

which once had had itself a real field day.

But die I will not given half the chance

to live on earth a life that's sweet and stable;

you can be sure I'll strive to keep my balance

as long as there's still food upon my table.

To live a pauper, that is just too dreary;

when life grinds on inexorably weary

You ruled I had to lose my secret kingdom

when you set up yourself as judge above me.

Now to your apron like a babe I cling, numb,

and beg a single token that you love me.

AM I UNTO DEATH QUITE WORN

Am I unto death quite worn,

sick and worn and lonely.

sick and worn and lonely.

Say, where is my little friend,

in the whole wide world?

Bruised my heart is slow to mend.

Are you coming back again,

in the whole wide world?

Come and help me for God's sake,

you alone can do it!

Sorrow fills the world with ache,

For God's sake, for my sake,

help, you who can do it!

ONE TIME A KINGDOM

One time a kingdom I ruled over, eja,

Honey and milk in that land overflowed.

Golden the harvests I reaped in it, eja,

precious the gems in its rich mother lode.

Am I not its king today? Are

all these riches no more mine?

Are these riches no more mine?

am I not its king today? Ah,

is the kingdom no more mine?

Is the kingdom no more mine?

It was in the time of the red hot blood

when we met each other first,

your eyes slew the peace of my heart for good

and your beauty awakened my thirst.

It was in the time of the yellow gall

when we met each other next,

and my soul smiled wide when we spoke of all

that we read in our hearts’ rich text.

It was in the time of the blackest gall

and shriveled we shrunk from the strife of it all

and our joy in tears was drowned.

It was in the time of the thickest phlegm

when outside was gloomy night

but we sat with our cosy cups, cradling them

Poems by Harriet Löwenhjelm in French

Poems by Harriet Löwenhjelm in German

If you want to join the Society, please send us an email message: info [@] harrietlowenhjelm.se